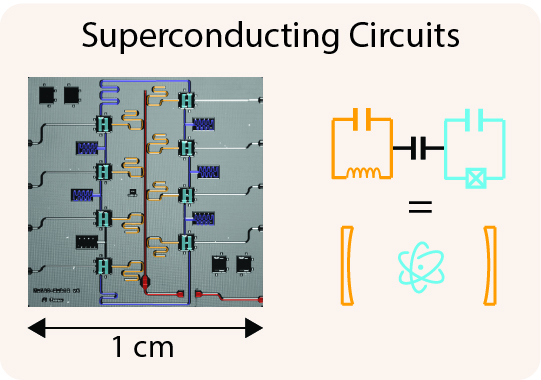 Our experimental platform consists of electrical circuits made of thin-film superconductors on a silicon substrate that we operate at cryogenic (10 mK) temperatures. We pattern the circuit with a standard lithography process to make resonators (modeled by an LC-circuit) and include Josephson Junctions (Al-AlOx-Al tunnel barriers) to create non-linear resonators.  The non-linear circuit behaves like an artificial atom with transitions in the 4-6 GHz range. We capacitively couple them to a cavity and apply resonant microwave pulses for control and readout.

Superconducting circuits are one of the leading platforms for quantum information processing. There are many great references to learn more about them including: 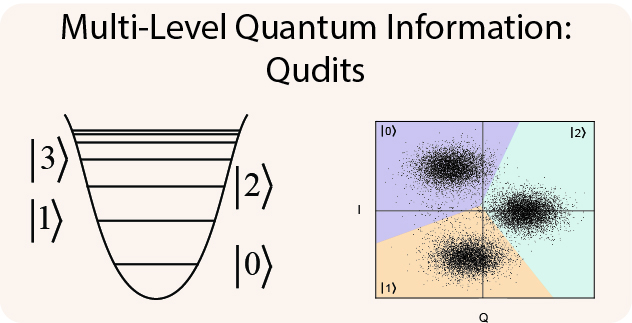 While most quantum processors encode binary information in a collection of two-level systems (qubits), the transmon circuit intrinsically features higher-level states that can be accessed. Using these levels, we are developing quantum processors that use N-level systems (qudits) as their elementary building block. In addition to an increased state-space, a qudit-based processor can execute algorithms with far fewer entangling gates compared to an equivalent qubit circuit. 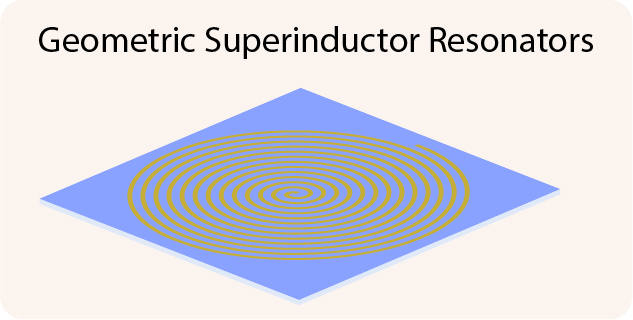 Planar spiral resonators can reach high impedances by harnessing the mutual-inductance between concentric loops in the spiral pattern. We are developing such high-impedance resonators to couple them to semi-conductor spin-qubits. Because spin-qubits need to be operated in magnetic fields, we are fabricating the resonators from thin-film superconductors with high critical field such as Niobium.