The dynamic properties of fluids and plasmas in extreme environments (high temperatures and pressures) related to astrophysics, planetary formation, and fusion sciences are not well-described. Part of the challenge is because such environments are difficult to produce and study at laboratory scale, and as a result, simulations rely heavily on our understanding of flow physics in “normal” environments. Our objective is to probe HED flows with advanced light sources at small scales, which will shed light on scale interactions in processes such as turbulent mixing, and benchmark and corroborate against simulations.

We are grateful for the support from DOE Office of Fusion Energy Sciences, the NNSA Stewardship Sciences Academic Alliances, and the National Science Foundation.

Clearance Pathways in the Brain

Metabolic waste in the brain is evacuated via a network paravascular spaces transporting cerebrospinal fluid. This clearance process is most active during sleep, and the buildup of the waste is linked to neurodegenerative diseases such as Alzheimer’s. In our work, we seek to shed light on mechanisms that drive the flow, using a computational approach informed by in vivo measurements. This project is in collaboration with Maiken Nedergaard, Ali Ertuk, Doug Kelley, and Jack Thomas. We are grateful for the support of the National Institute of Aging (National Institutes of Health) and the National Science Foundation (CBET Division). 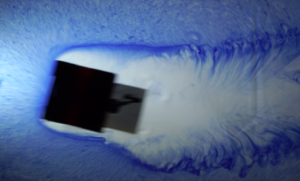 While many animals are able to navigate multiple media — water, air, land — with reasonable deftness, we struggle to impart the same ability to autonomous vehicles. We are adapting a mechanism that works well in moving over sand and water to be able to cover complex media that occurs in the sand-water transition, and studying how this propulsive mechanism produces thrust differently from conventional engineered propulsors or biologically-inspired ones. Elements of this work are in collaboration with Hesam Askari, Alice Quillen, Scott Seidman, and Randal Nelson, with whom we share a seed grant (University Research Award). This research is also partially supported by ONR. 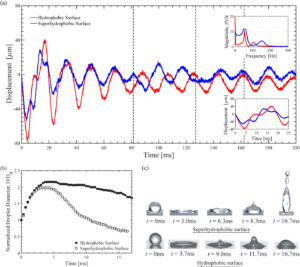 Superhydrophobic (non-wetting) materials are abundant in nature and have a number of transport properties (e.g., icephobic, omniphobic, anti-fouling, drag-reducing) that can be harnessed into engineering materials for airplane wings, building materials, medical equipment, and so on. The non-wetting state, however, can be compromised by impinging droplets in the form of rain or chemical sprays. Our lab is interested in characterizing dynamic droplet phenomena on these surfaces to gain insight on how to develop improved surfaces that are robust for the desired application. 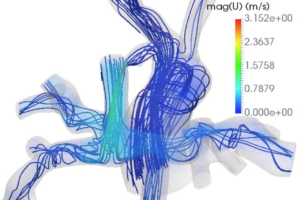 Infants born with single ventricle defects undergo a series of 3 surgical procedures beginning shortly after birth. The first stage, a systemic-pulmonary shunt, has the highest mortality of the three. The second stage, the Bidirectional Glenn, should provide a better circulation than the first stage, but has led to extremely high mortality among neonates. Through virtual surgeries and numerical simulation, we are investigating the Assisted Bidirectional Glenn (ABG) — a modification to the Glenn — as a viable procedure for neonates. This work was previously performed with the Stanford Cardiovascular Biomechanics Computation Lab.

Center for Matter at Atomic Pressures